The basic currency / unit of purchase of Internet ad inventory is “Thousand” impression blocks. Cost per thousand is referred as CPM. (M here stands for ‘Milli’ in Latin which means ‘Thousand’)

Whenever a surfer clicks on a Banner Ad, it is recorded as a “Click”. The percentage of number of clicks from number of impressions is measured by Click Though Ratio (CTR). So for Eg if 1,000 impressions lead to 5 clicks then the CTR will be 0.5%.

A lead is defined as a potential customer who is interested in buying the product advertised and provides his contact information like email id , contact numbers etc. Today a bulk of Online Advertising is happening for generation of leads.

Generally a whole lot of Product Categories need Offline Sales teams to “close the sales loop”. Typically, in such cases the leads generated Online are passed on to the Sales organisation who close the loop by talking to / meeting the prospective customer.

However, for online organizations like a Travel Portal, acquisition will happen when the customer finishes an online transaction like say buying a ticket. Technology easily allows us to monitor the number of people coming to a site from an Online Ad campaign to ascertain how many people who clicked and reached the website actually ended up completing a transaction.

C2A : Clicks to Acquisition ratio. Number of Acquisitions from people who clicked on a particular Banner Ad. If we get 1 transacting customer lead from 100 clicks then the C2A will be 1%.

The following illustrations will give a clearer picture of the terminology used and the way Online Advertising campaign objectives and Metrics are juxtaposed & viewed . 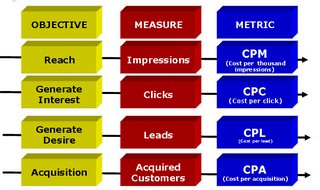 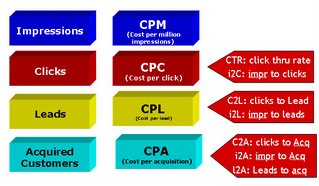 Google Meet on the web will now automatically fix your camera’s...

It is *extremely* important for you to drop everything and look...

RE:IMAGINE: New temporary exhibition at the BMW Museum to coincide with...