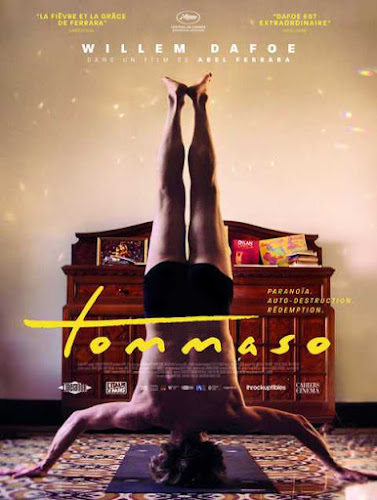 The year 2019 saw four directors from four different countries make semi-autobiographical feature films: Spanish director Pedro Almodovar made Pain and Glory, Palestinian director Elia Suleiman made It Must Be Heaven, US director Abel Ferrara living and working in Italy made Tommaso and rookie British director Joanna Hogg made The Souvenir. Each of them found different groups of cineastes being enamored by their creative products using distinctly different approaches to filming the problems they as filmmakers face in real life. Some hide their thinly veiled identity by choosing a nom de plume such as Tommaso (played by Willem Dafoe) in Abel Ferrara’s film which will not fool any astute viewer. Tommaso is a fictional name of a filmmaker resembling Mr Ferrara, developing his own original screenplays for future directorial projects, and he too lives in Italy and is learning Italian and teaching acting to potential actors as he has chosen to live and work in that country. Tommaso is married and has a young kid called Deedee. So does Mr Ferrara. The wife of Tommaso is actress Christina Chiriac, who happens to be Mr Ferrara’s wife in real life. Deedee is played by Anna Ferrara, the director’s own biological daughter. Yet, Mr Ferrara opts to use a nom de plume.

The approaches of the other three directors in their respective 2019 films are somewhat different. Spanish director Pedro Almodovar made his semi-autobiographical film Pain and Glory with the lead character, a fictional film director named Salvador Mallo (Antonio Banderas, winning the Cannes Best Actor award for the performance) with some obvious parallels to Mr Almodovar’s own life. According to journalist Sabrina Rojas Weiss, writing in Refinery29, Almodovar admitted to Los Angeles Times “There is a lot of myself there, but somethings belong completely to my life and some do not but could have been.” Joanna Hogg’s film The Souvenir is again autobiographical, recalling her days in a film school through the eyes of a fictional film student called Julie. Only in the case of the Palestinian director  Elia Suleiman, in his admirable work It Must Be Heaven, the director chooses to play himself facing the camera without uttering a word but as a spectator of humorous, semi-fictional events and identifying himself with his initials ES.

While Suleiman identifies himself and his thoughts in his film almost completely through visuals, Abel Ferrara chooses to identify his honest thoughts using the spoken words of his nom de plume Tommaso. When Tommaso is picked up by the secret police in Italy for making some comments in public and is forcibly made to confront a senior police official, Tommaso states with certain gravitas: “The temple of all laws must fall. A new temple of truth should be built. Don’t take me literally. What is truth? Truth is you are in pain, you have a terrible headache. You are thinking of suicide. You should take a walk in the park. The trouble is you lack empathy. You care for your dog.” The viewer would initially assume the rant is about Tommaso. You realize it isn’t only when the police official removes Tommaso’s handcuffs and responds to Tommaso with respect, “Are you a doctor?” Ferrara is merely emphasizing the importance of a film director to note details and gestures of people around them as an observant doctor would.

Ferrara does not limit the film to the present. He reveals a bit of his tortured past in a group therapy session for drug addicts where he recalls he asked his 4-year-old adopted girl child “Are you leaving because I make too much noise?” (a likely scenario from his own life). The very same Tommaso ironically rushes out to quieten a drunk Pakistani shouting in the street outside his apartment in Rome at night because Tommaso’s (read Ferrara’s) real girl child born much later in life is likely getting disturbed by the noise of the drunkard’s rants. Mr Ferrara seems to indirectly state that he has matured over the years, being more responsible for his family. In another sequence in Tommaso, the character hallucinates that his daughter is run over by a car while crossing the street while rushing to hug him.

If one looks at Ferrara’s move to Italy from the US to make films one of his films made in 2009 is a docudrama called Napoli, Napoli, Napoli (Naples, Naples, Naples). In Tommaso, towards the end, there is a scene of Sophia Loren dancing in her 1960 US film It Started in Naples playing on a video screen to which Tomasso’s daughter Deedee is dancing in tune. These visual connections would be lost on a viewer who does not know much about Ferrara’s life and career. In a very revealing interview to Eric Dahan in Numero, Ferrara states “All my films, alas, say something about me, one way or another. I try not to be me but in the end of course I cannot help it.”

Ferrara reveals his own tortured creative life with simple actions in Tommaso. While Tommaso is trying to work on a screenplay for a film project in the night when all his family is asleep, a light bulb of a crucial lamp in his study fails and new bulb that he replaces it with in the lamp also fails as he switches on the electric current. The next morning, an angry Tommaso, is on screen walking down the pavement with the troublesome lamp in hand, leaving it on the sidewalk but not in the trash bin, as his wife and daughter watch his angry actions with concern from a safe distance.

For Ferrara watchers, Tommaso is merely one of many films that the director has used Willem Dafoe as a lead actor of preference. Dafoe played the lead in the biopic Pasolini (2014), another Ferrara film set in Italy, 4:44 Last Day on Earth (2011), Go Go Tales (2007), New Rose Hotel (1998, sharing lead with actor Christopher Walken) and again in Siberia (2020). The close ties between the director and the actor increases in Tommaso where Ferrara depicts Dafoe playing Tommaso allegorically “crucified” in public in modern Rome creating a visual connect between Dafoe’s role as Christ in The Last Temptation of Christ. Next to the “crucified” Tommaso is a “crucified” African immigrant as a follow up to a sequence where Tommaso offered a group of African immigrants, sitting around an open fire in a garden the previous night, an allegorical “bloody heart” during a “last supper” while speaking the words “Take this. This is all I have.”

P.S. Tommaso is one of the author’s top 20 films of 2019. The film won the grand jury prize at the Lisbon and Estoril Film Festival. Elia Suleiman’s film It Must Be Heaven mentioned above has been reviewed on this blog earlier (Click on the name of the film in this post-script to access it.)

#Shitlassian – How Atlassian fired me because my wife had cancer

#Shitlassian – How Atlassian fired me because my wife had cancer

Implementing a class with void*