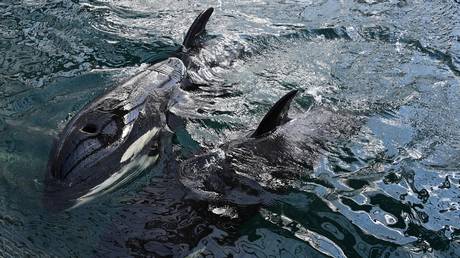 Russia’s prime minister has said that Moscow will introduce tough new prohibitions outlawing the capture of many large sea mammals off the coast of the country, as experts recommend radical measures to save them from extinction.

Speaking as part of a government meeting on Thursday, Prime Minister Mikhail Mishustin said that “we are proposing to introduce additional regulations for industrial and off-shore fishing.” He added that the new legislation will be an opportunity to introduce new protections for whales and dolphins, and the new bill aims to prohibit catching them. “We hope this will save animals from predatory extermination,” Mishustin announced.

The prime minister said he hoped the move would “not leave anyone unclear” about his government’s ongoing response to the so-called ‘whale jail’ scandal in 2019. Around a hundred beluga whales and orcas, also known as killer whales, were found kept in cramped pens and ponds in the Russian Far East, with their health suffering as a result. It was reported that the keepers had planned to sell them to Chinese sea parks.


When news of the facility broke, Russian President Vladimir Putin took personal command of the situation and ordered the animals be released. A public outcry saw celebrities such as Leonardo DiCaprio and Pamela Anderson campaigning for the welfare of the giant mammals, and authorities oversaw a colossal effort to return the whales to the ocean. All 97 belugas and orcas were released. This April, three of the former captive whales were spotted off the coast of the Far East capital, Vladivostok, appearing healthy and having survived two winters in the wild.

Vladimir Latka, the scientific director of the Whale Protection Fund, welcomed the move, saying the country needs “a permanent ban on the capture of cetaceans for cultural and educational purposes, as well as a ban on their export, transit and touring. Such bans would really save our belugas and dolphins from innumerable suffering.”

Seeing These Houses Will Make You Feel Cold